HUB CITY OF ASIAN CULTURE GWANGJU
A Window of Asian
Culture to the World : 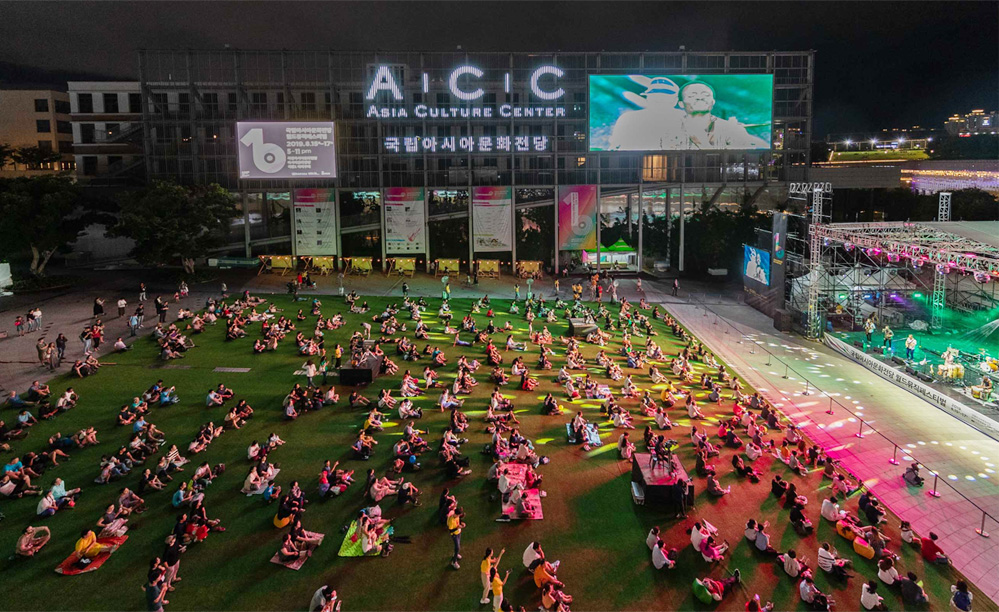 Asia's cultural
window to the world

Asia's Cultural Window to the World
Joining Asian Hands in Culture as the World Awaits Us
The goal of Hub City of Asian Culture Project is to establish in Gwangju a city where the cultural resources of Asia are exchanged, created, trained, and shared, built upon the vast diversity and creative prowess of participating countries. The Project's larger vision is to contribute to enhancing the overall quality of life of Asians, and more, to promote continent-wide development and joint prosperity.

City of Asian Cultural Exchange
The City will be a cosmopolitan forum of exchange in which the diverse cultures and communities of Asia coexist and share symbiotic relationships. Such international exchanges shall form an integral part of the lives of the Asian population.

City of Asian Arts and Peace
Butressed by the values of democracy, human rights, and peace, combined with creative imaginations, the arts and culture shall serve as medium in upholding the values of peace and freedom in this City.

City of Culture-based Economy
Every aspect of a community's cultural life become an article of commerce. The City will feature a next-generation town that fosters a high value-added economy leveraging culture as its growth engine

Foundation: Culture City
Urban sprawl resulting from modernization, environmental disasters brought on by global warming, and the like are serious problems common to Asians today. One solution to such problems can be offered by this "Culture City.“

Contents: Asian Culture
The world is sharply focusing its eyes and ears on the continent of Asia which is home to half of Earth's population and accounts for half of the global production. By rediscovering the cultural diversity and values of Asia where scores of ethnic groups, religions, and cultures collide, intersect, and come together with one another, the process can serve as a springboard to realizing Asian co-prosperity.

Direction: Forum for Communication and Exchange
The Silkroad demonstrates how actively Asians long ago were involved in mutual communication and exchanges. By investigating and shedding light on the wide spectrum of Asian culture and building a network among cultural organizations/individuals in Asia, a forum can be created to reinvite the lively communications and exchanges of the past.

1. Establish and operate the Asia Culture Center(ACC) as production center for cultural contents

The Asia Culture Center is a multi-functional cultural facility where diverse cultural assets of Asia are leveraged to feature exhibitions, performances, education programs, research work, and creative activities, through which the general public and artists engage in exchanges and inspire one another in the creative artistic process. The creative energy of the Asian cultural contents produced in this manner shall radiate not only in Gwangju and Korea, but shall diffuse itself throughout Asia and the rest of the world

Under the overarching goal of achieving phase-by-phase development and growth of the HCAC, the Project will endeavor to create "cultural belts" with a circulatory mechanism throughout the entire city. With the ACC at the heart, the city, through cultural regeneration, will be divided into five Culture Zones based on key functions to ensure that the cultural energies of the city are relayed ceaselessly. 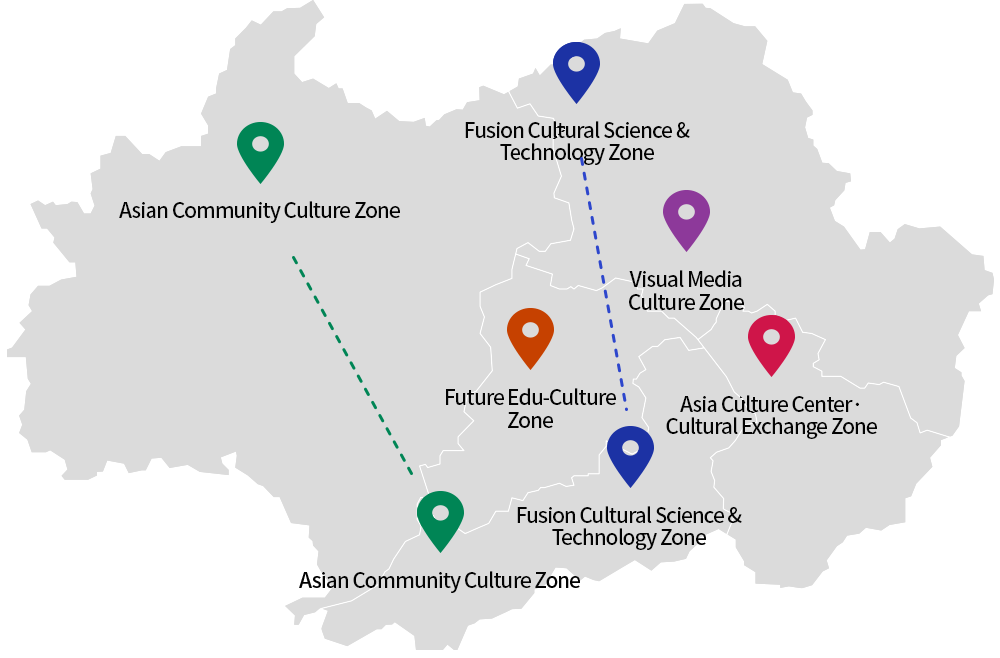 The Project aims to nourish the artistic strengths of the City, and funnel in resources to promote the top five cultural contents businesses including music, crafts & design, games, hightech images, and edu-tainment, to further grow them into cultural & tourist industries.

4. Heighten the City's status and reinforce its cultural exchange function

Hub City of Asian Culture is to be a forum in which different aspects of all the coexisting cultures of Asia are shared. The general public will naturally be exposed to such cultural openness and acquire a deeper sense of appreciation of Asia and its constituent cultures. To build this "city of cultural exchange," a network of international dimensions whereby culture bonds the people of Asia will be fostered.

1. For the general Public

The people will be able to relish a higher quality of life by embracing culture in their daily lives and also unleash their artistic potential through training programs. In addition, they will be given greater opportunities for self-realization by offering themselves to a variety of jobs that will be created with the execution of the HCAC Project.

High quality human resources from throughout Asia are expected to converge upon the City. Bustling with cultural activities for the public and active cultural exchanges, the City will experience revitalization of the local economy with this significant growth in social capital.

The state will be able to derive a model of balanced national development by means of culture, and forge an identity of openness required of a culturally pluralistic society. For Korea, the country is expected to step on to new dimensions with its status enhanced within the Asian community.

The Project aspires to promote the great diversity of cultures in Asia and establish a model of sustainable development by capitalizing on the cultural resources of each state in the continent. Furthermore, by fostering exchanges and interaction, it is hoped that trust and peace among all countries are built to last.

An in-depth appreciation of Asian cultures by people all over the world will reveal the truly unique values of Asia. The Project pursues solidarity and networking at the international level with a view to overcoming the limitations of modern civilization.

Expected effect of urban development in 2023